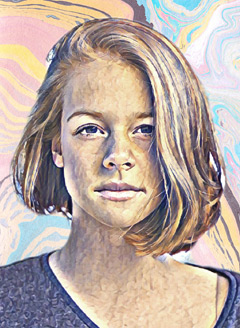 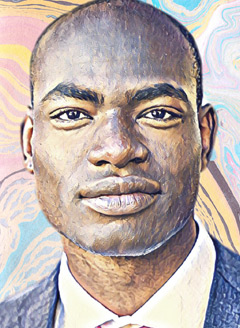 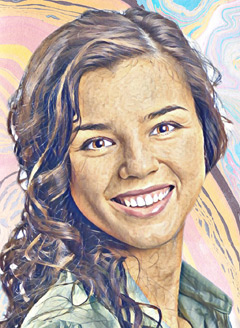 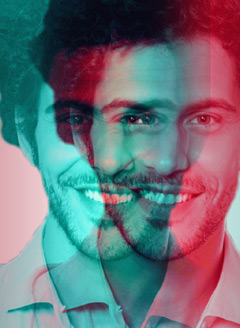 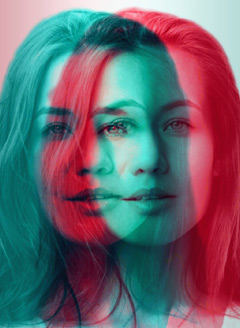 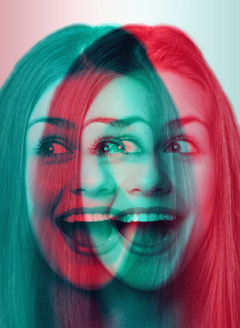 You can see examples of figure templates in the Photo Lab app in the Art Backgrounds, Smart Filters sections and others.

Note that not only human figures in photos can be treated as figures in templates. Any object that occupies the most part of the photo and has distinct outlines can also be treated as a figure.

In this manual we mostly look at examples of figure templates designed to insert human figures. However, if we use these templates with photos of buildings, cars, animals, etc., their figures will also be detected and processed by the templates.

In order for a template to be properly processed by the Template Creator, it needs to have a certain structure in Photoshop. Read this page for rules and special aspects regarding layers arrangement in a PSD document.

Creating a project in the Template Creator

To work with the Template Creator, you should associate your PSD file containing layers with a *.pttp2 format project file.

How to start: a step-by-step guide

Open the Template Creator when Photoshop is already launched (if Photoshop is not running, it will start automatically when you open the Creator). Go to the File menu, and select Create Project: 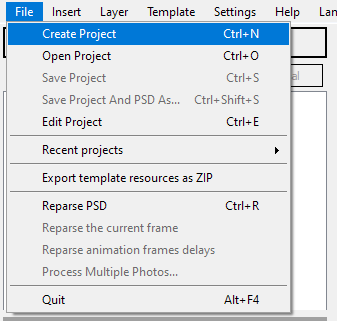 A dialog will open, where you need to fill in the parameters of your template and save it in a selected directory. 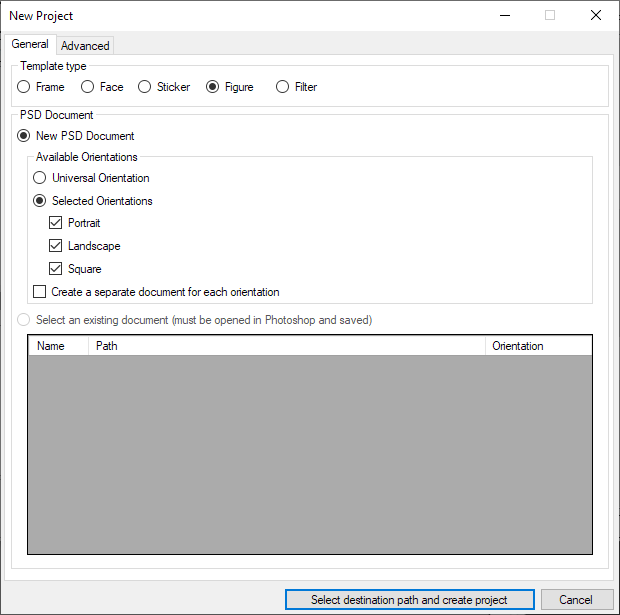 This dialog allows you to create several types of PSD documents:

When you are done with the dialog, The Template Creator will generate a new PSD file in Photoshop. This file is associated with a new project and has the necessary structure of groups and subgroups: 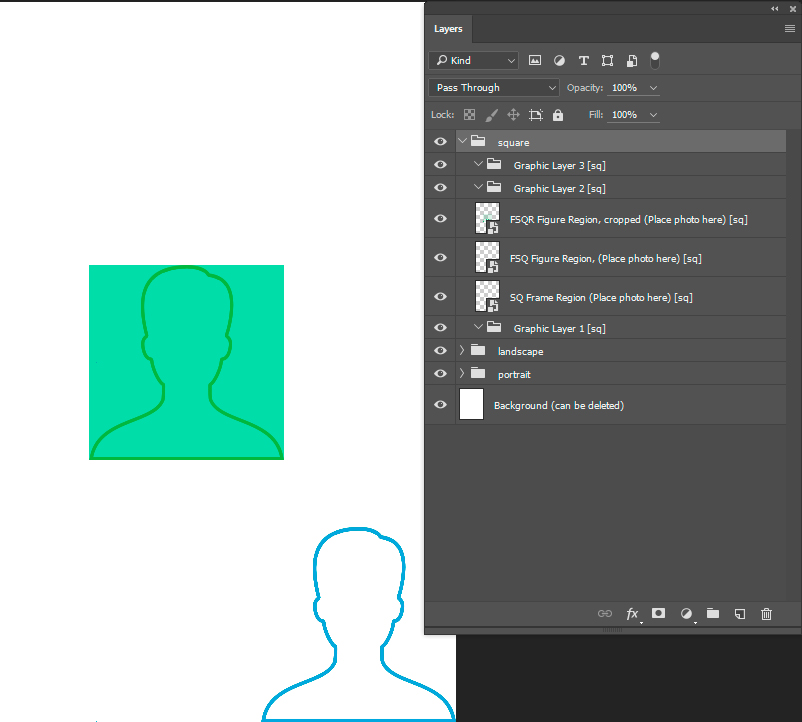 If there are open documents in Photoshop, the project creation dialog will allow you to make a project based on existing documents: 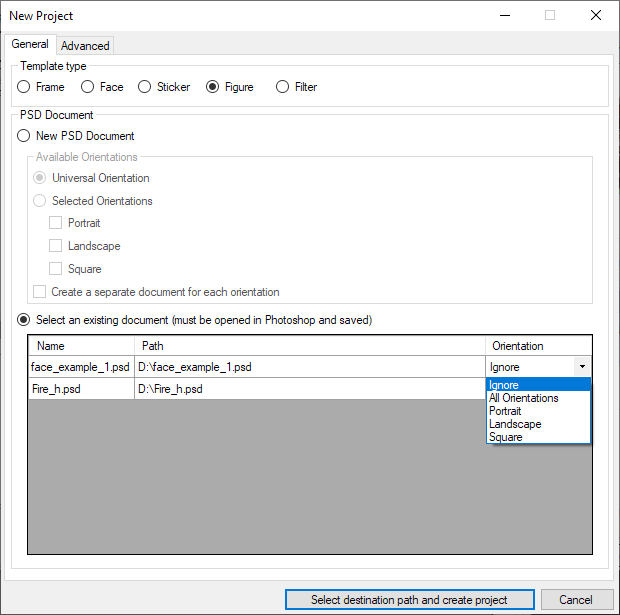 You can change the binding of a PSD document to the project at any time by clicking "File → Edit Project" (CTRL + E). 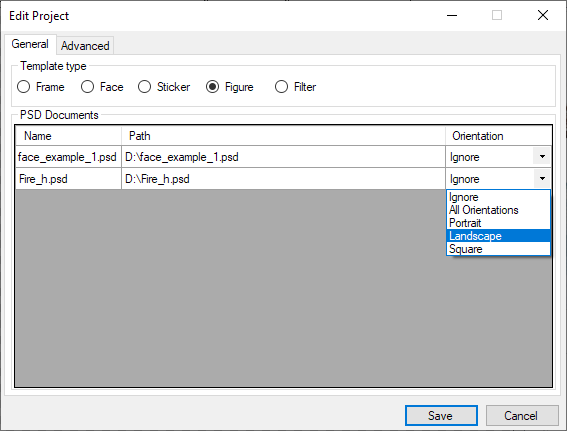 More information about the Template Creator and how to test ready templates can be found in this section.

A figure user photo region allows to detect a figure in a user photo and make the background around it transparent.

There are two types of figure regions:

Below you can see results of processing the same photo in case different types of figure regions are used.

The original user photo is not cropped:

The user photo is cropped to the rectangle that fits the figure bounds:

Below are illustrations showing the difference between figure regions without cropping the original photo (FSQ) and with cropping (FSQR):

In case you use a figure region without user photo cropping, you cannot specify the exact size and position of a figure in a template canvas, as figures are positioned randomly in user photos.

On the contrary, figure regions with original photo cropping make it possible to control the figure size and position, because an FSQR region first crops a user photo to fit the figure size, and only then it inserts the cropped image area into the specified position in a template canvas. In this way, a figure will occupy the most part of a FSQR user photo region.

The ‘Insertion mode’ parameter lets you specify how a user photo will be inserted into a figure region. The following values are allowable:

There are different approaches to distorting a figure region, depending on what particular type of region (see comparative illustrations above) you want to distort.

With an FSQR user photo region (cropped to fit the figure bounds) distortion is applied to the figure itself. It is important to keep this difference in mind when applying distortion effects to figure regions.

When applying masks to FSQ and FSQR user photo regions, follow the same considerations as for distortion effects (see above).

You can also use filters and neural filters, as well as simple masks, with figure user photo regions.

Figure templates can be combined with other types of templates, for example, with frame templates. Besides, several copies of one figure can be used in one template.

There are several restrictions that you should be aware of when creating figure templates:

The Template Creator lets you flip smart objects of the user photo region horizontally or vertically. 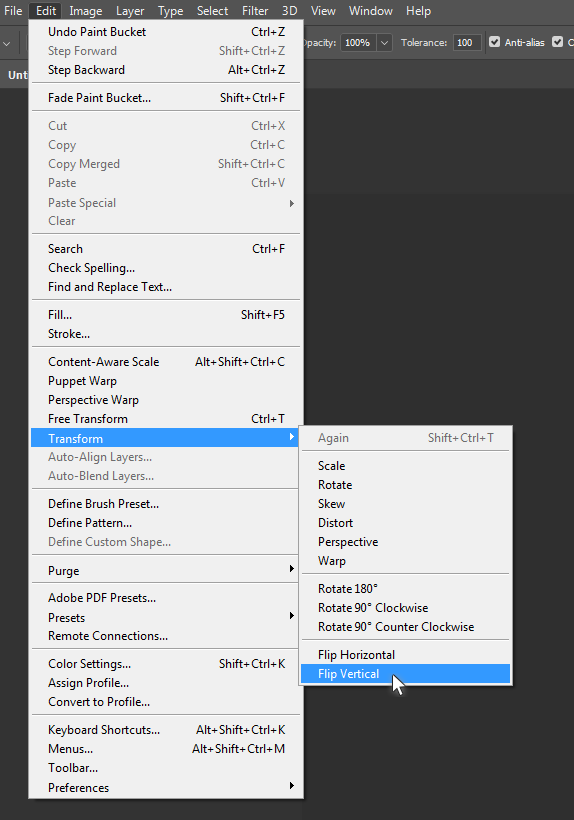 When you reparse your PSD document, you tell the Template Creator that one or several user photo regions have been flipped. Later, when you process test photos, make notice that images placed into a specified user photo region are flipped horizontally or vertically.

Flipping works in the same way for all user photo regions regardless of the template type.

To avoid problems related to size mismatch, use the automatic resizing option.

The Template Creator makes it possible to create projects with several different user photos inside one template. Read more about it here.

This template type can be animated. More information on animated templates development can be found here.

There are some temporary restrictions regarding using animation in templates. Learn more about them here.

Using a mask based on a user photo